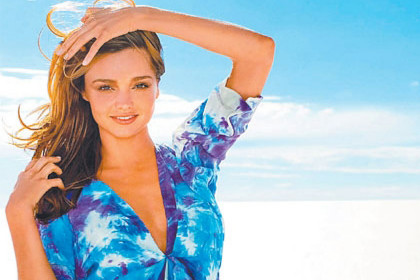 Model Miranda Kerr tells why she believes the blood type diet is best for her.

She has been blessed with more than her fair share of good looks, but Australian model Miranda Kerr says following the blood-type diet is the key to maintaining her lean, healthy physique.

Before Kerr captured the attention of the modelling world, the Gunnedah, NSW-born beauty had her sights set on a career in nutrition. She had even enrolled at the Academy of Natural Living in Queensland to study nutrition and health psychology.

According to naturopathic physician D’Adamo, the diet is based on the premise that certain foods are more compatible with particular blood types.
The diet’s celebrity followers include Demi Moore, Elizabeth Hurley and Courteney Cox Arquette.

People with type-O blood, which D’Adamo claims is the earliest human blood group, are said to benefit from a diet similar to the first humans, who ate a protein-rich diet, while type-B adults should stay away from wheat and chicken. The diet recommends AB blood types should eat small meals frequently and be aware of combining their food correctly.

Kerr, who has type-A blood, follows the book’s recommended vegetarian-based diet, which is high in organic vegetables, fresh juices and legumes. Despite her hectic schedule, which involves regular air travel and long days, the Victoria’s Secret model says her diet and exercise regime is easy to follow and says she carries healthy snacks wherever she goes.

“Some of my favourite snacks are organic almonds and blueberries, half an avocado with sea salt, and I also love eating Fuji apple pieces with almond butter and agave – it feels like a treat but it’s really good for you,” she says.

Kerr, a Nichiren Buddhist (a Japanese school of Buddhism), who meditates and practises yoga regularly, says low-impact, calming exercise is also recommended for people with an A blood type.

“I practise yoga daily; I do half an hour in the morning plus half an hour of meditation,” she says. “Dedication is key for me because with my constant travel schedule I find it very grounding and energising.”

The blood-type diet is viewed with scepticism by the medical fraternity. “There is no scientific link between your blood type and what you should be eating,” says Sharon Natoli, dietitian and director of Food & Nutrition Australia. Natoli says the diet is not recommended as a long-term eating plan as entire food groups are missing from some of its blood-group meal plans.

Tara Diversi, spokesperson for the Dietitians Association of Australia, says people with Kerr’s blood type who are following the vegetarian-based A-type diet need to ensure they are eating plenty of protein- and calcium-rich foods, as well as legumes and grains, which are high in amino acids.

While Kerr follows the diet closely, the David Jones model says she occasionally indulges. Her weaknesses include dark chocolate Lindt balls and her nana’s steak pie. “I believe in a balanced life – it’s not about depriving yourself – so I eat 80 per cent organic, nutrient-rich foods and 20 per cent indulgence foods,” she says.

Another important part of Kerr’s diet is noni juice, which she says helps her combat everything from pimples to jetlag. “Whenever I’ve been sunburnt or had a pimple I’d soak a cotton ball in it and place it on my skin and it would be really soothing,” she says.

Kerr is such an advocate of the juice that it has become a core component of her new skincare range, Kora. Kerr has worked on the range, which has been produced in Australia, for the past three-and-a-half years. “Noni juice is scientifically proven to heal on a cellular level and it’s also beneficial for skin health,” she says. “It just made sense to have it as a key ingredient in my products.”