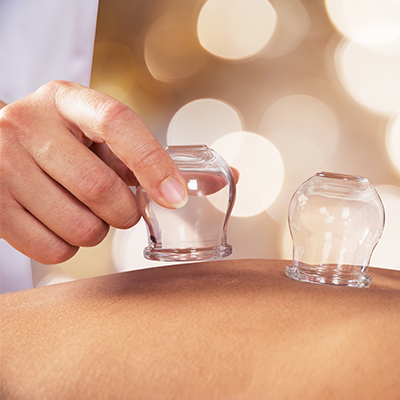 Cupping Therapy is a form of natural medicine used by Chinese Medicine and acupucnture practitioners. It  has been used in Traditional Chinese Medicine for thousands of years and now has been adopted in modern day practice by other allied health professionals. Cupping however did not orignate in China and its first reported use was  by ancient Egyptians who were the first to use cupping as a treatment system. The oldest medical text known The Ebers Papyrus which was written 1550 BC is thought to describe the use of cupping to remove toxins and waste from the body.

The father of medicine Hippocrates and Galen were also said to be proponents of cupping therapy. Cupping involves the strategic positioning of cups on various parts of the body and the meridians (acupuncture channels). Traditional cupping involves the use of a flame to create a vacuum that lifts the skin upwards into the cup. Modern cupping however involves the suction of the skin using a pumping device. The objective of cupping like acupuncture or massage is to manipulate the skin in order to influence the blood flow and to restore chi or energy flow through the body. Via the suction of the skin the blood and chi can therefore facilitate the removal of toxins and pathogenic or waste products from the body. Cupping is also very useful for assisting the lymphatic system of the body and is excellent for detoxification.

It is very normal after a treatment of cupping to have redness at the site of application. The redness can last up to 14 days after the treatment.